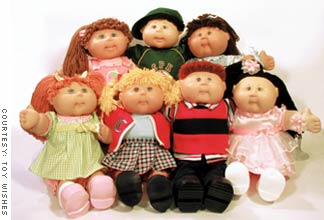 The year, well it was way back in the 80’s and I was pretty young. We have been abroad for so long, that honestly, the toys that were popular were not exactly on my Christmas wish list. I had not watched any kind of t.v. and E.T was still not on my radar.

We came back to our native land, and I began school like any normal kid. Classmates would show up with the strange-looking dolls, I didn’t really understand them. They looked strange, when I asked one girl what her doll was, she looked at me hotly, and replied “it’s a cabbage patch kid!” She had no idea that living abroad meant I had no idea what the meaning of that was.

That Christmas, like every other year, we got a couple of presents under our tree. My parents never really spoiled us, and neither did Santa. My favourite great Aunt had made it to Florida in one piece, like they always did. They called us on Christmas morning, we had snow, they were sitting out in 15 degree weather.

I counted down the days for my Great Aunt and Uncle’s return. I loved visiting them more than anything. Like many retired folk, they prefered to spend 5 months of the year avoiding winter!

On their return, they came over for tea, and the My Great Aunt had a surprise. It was a red-headed Cabbage Patch kid, with an orange wind breaker and jeans. I was so excited I cried, I had never had such a wonderful present. She went with me everywhere.

What I found out much later, my great Aunt and Uncle went and lined up at the store during the height of the crazy Cabbage patch wars, and fought to buy each kid in the family a cabbage patch. She described the war zone, and said “it was a good thing she was petite, and that she had lived through the war in London, as it was good training ground for the war zone for cabbage patch dolls.” She apparently crawled on the ground, grabbed a box and would throw it to my uncle, who was 6’4, he would catch it, and guard them with his life.

The story was so sweet that I love and still love that Cabbage Patch doll more because of it.