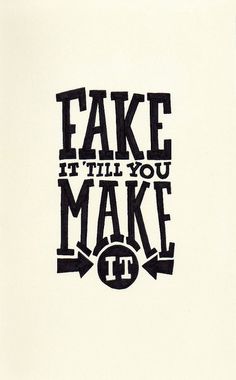 Who the hell coined that phrase? I don’t know, but my first day at Foreign Affairs, I had 4 people tell me just “Fake it, Till You Make it.” I couldn’t figure out what exactly I would be faking, and what I would be making and how would I know if I made it? The phrase was so overused. I was young, and thrown into the deep end with 3 files that I had no background in, and absolutely no business holding, but I guess, I just had to figure it out. Unlike rotational diplomats, I was never going to go on postings, I was someone who would be staying at headquarters to be an expert at one thing, and supposedly, never leave until retirement. I guess no one thought that once I became an expert, I would eventually get bored!

So, there I was. Massive files in hand, figuring out slowly what it was I was supposed to be an expert in. I had no training, like ABSOLUTELY NONE, I was just told to take the files and run with it. While rotational get months of training in school, non rotational go through a nasty process of competition, then when they land the job, it becomes sink or swim time. For months, I kind of paddled around, barely able to keep it together the majority of the time. When I finally ask what the heck does fake it, til you make it really mean? I was told, just fake that you are the expert at it, being a Diplomat means you are an expert at faking things. No Joke, I almost choked on my tea. I had never thought of diplomats as good fakers, having been around them all of my life. They were good actors at times, putting on brave faces during hard times, but faking it seemed too extreme. As it turned out, one of my old school bosses enjoyed the fact I never claimed to be the expert, little did he know, I kinda felt like a clown was going to jump out of a corner screaming faker, if I tried to fake my way through any of it. I almost became paranoid about it. Regardless, my files relied heavily on the experts of other government departments, people who had degrees in other fields, there was no way I would be an expert in those fields, however, I would become an expert at process, negotiation and the international apparatus. So, while everyone within my own department claimed that faking it would be the safer path, my willingness to rely on others, actually gained me respect. Diplomats can put others off with their superiority complexes, because I didn’t have one, it actually make negotiating easier.

Anytime someone wants to argue “Fake it, till You Make it”, just don’t, no matter how good you think you are at faking it, someone will always see right through it.