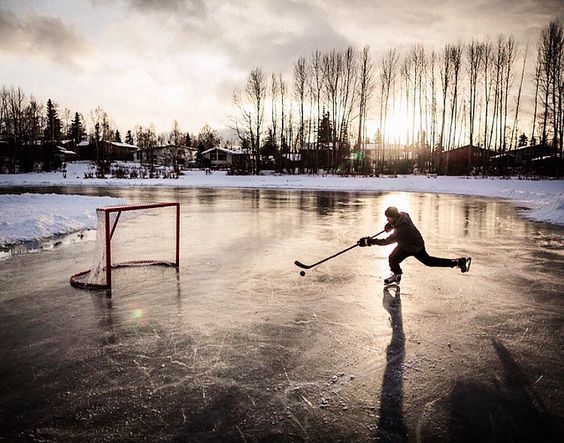 My first days at boarding school were a blur of tears and panic. I would quietly make my way to the shared bathroom in the girls dorm, and weep in a stall. It was one of the most isolating times of my life. Usually when going through culture shock, I had the privacy of my own room, in my own house, to shut out the chaos, but in boarding school, there was never a moment of privacy, even in the loo. I managed to find time between 12 – 6am to find some peace in a corner of the bathroom. No one ever came in during those times, so it was here that I shed more tears than anywhere else, afraid to let anyone else see my unhappiness and my confusion. It was here, I journaled often, chronicling every weird thing that happened.

After months of attempting to fit in, winter set in, and so did the hockey season.

I had been told of this strange sport, after all, it was my countries obsession. I grew up in a house of Shakespeare, Politics, and golf. The closest I came to seeing any sort of sport was season’s passes to the ballet. My Father never watched a sport, and I never heard him discuss a love of sport.

I befriended a group of girls, and they were heading into to town to the local arena to see our school play hockey. According to them, it would be a good game against our rivals, plus, it didn’t hurt that the boys would be cute. I decided to head out with them, after all, I had never seen the game, EVER.

There I was, sitting in the arena, cold as ice, watching the slaps of the sticks, and sound of pucks slamming into the boards with a slam of a body right after. I asked quietly what the rules were. All 3 girls looked at me speechless, not knowing what to say for a couple of minutes, then all at once a flurry of explanation.

As began to explain the game, I kept watching, unsure of what I was seeing.

My first thought was “I am really cold, what the F is the point in this”. My inner dialogue became more sarcastic “at lease in soccer, you can see the true athleticism, why is this our national sport, what is the excitement, there was more hitting of the boards than the puck.”

I had let down. The buzzer went, the game was over, and the 3 girls looked at me with wide eyes, waiting to see how I enjoyed it. I half smiled and shrugged, not sure what to say. We all left, and the 3 girls wanted to hang around outside of the change rooms to see the boys from our school and the other.

I stood there, not sure what to do, it was just so weird to be standing there waiting, it wasn’t like any of them were good friends with the guys on our team, and non of them were dating anyone from the team. Local girls began to show up, joining us in the wait, giving us evil eyes. I had no idea why they were standing there, did they know any of them?

As our classmates began to appear out of the change rooms, the girls all congratulated them on a great game. The eyelashes batted, there was great excitement. I DID NOT GET IT. I recognized one of the guys on the team, he and I had become quick friends, I had no idea he was even on the team, or that he played hockey. He smiled at me, and shouted out “So you finally decided to do something Canadian! How did you like your first hockey game?”

I smiled, and said “I don’t get it, don’t see what the fuss is about.”

With that, every girl in earshot was shocked, and began swearing at me. I guess I said something I wasn’t supposed to. The guys all laughed and thought it was hilarious, they thought it was novel that someone had never seen a game.

For 2 years, I attempted to watch hockey, it never made any sense. Then, I married a man who had spent his childhood playing hockey. Thank goodness he doesn’t watch it, because honestly, I still don’t understand it, and frankly, I don’t enjoy sitting in a cold arena freezing!