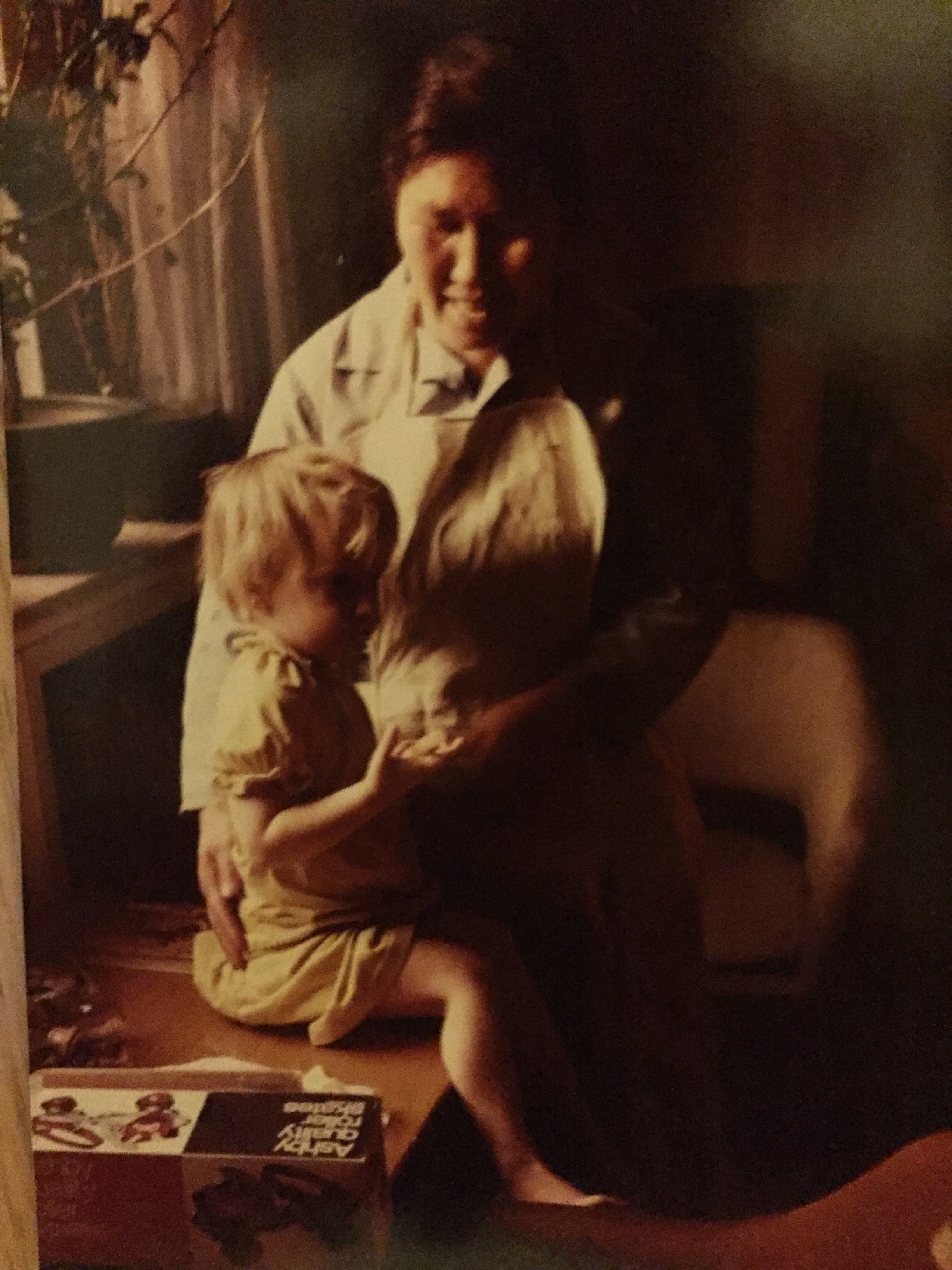 My old rag doll sits with a small pleated skirt, it is a faded white silk with peach flowers and an elastic waist. It has been my rag dolls attire for so long, I never knew where the little skirt came from, I just had an assumption that there was no story.

Only a few years ago, did my Mother comment that I still had that silk skirt, she was facing a small chair that my rag doll was sitting on, the very one she had carefully made for me one Christmas, she was surprised that I still had the skirt. I told her it was a happy skirt, that it always made me smile, she was surprised, because of its story. She said it made her happy and sad, for there was a story attached. It was my turn to be surprised, I thought there was no story.

We had moved to China only a year after it had opened up after the cultural revolution. The first order of business, was the Chinese government issued us a Nanny, and a cook. They were spies for the government. Each day they would report to an office and tell an officer exactly what our every move was that day. My Mother was a little bothered that we had a nanny, she was at home with us, so she didn’t really know what to do with her. But, that Nanny, was all mine. She smelled like ginger and garlic. She cuddled me and sang songs. She taught me Mandarin, and took me on little walks, when people approached me to touch my white blonde hair, she reprimanded them, and let me hide behind her. She loved me, and I loved her. The affection we had for each other, was not the government’s intention, she was not meant to love me, that was for sure. She did her duty by reporting everything we did, and what she did in our house, my parents made  sure they did nothing that would get her into trouble, even though they wanted to give her extra things, the cook was a communist spy to the core, and would tell on her and us. We lived by the Chinese governments rules, like an anthropologist, we never criticised the culture, or lack there of, we embraced the rules, but never taught anyone what it was like outside China, it wasn’t for us to do that.

We lived a very odd life, under a microscope, but somewhere in there, we found love. When we were packing up to move, I remember how traumatizing it was for me to part from my Nanny, she and I had bonded, and I didn’t want to let her go, but I was still young and didn’t understand she couldn’t come with us. The morning we left. My Nanny came running into my parents room, gave my Mother a small package, wrapped in silk. She told my Mother to pack it right away, and not open it until we left, and to not say a word that she had given my Mother a thing. My Mother nodded, hid the small package at the bottom of the suitcase and did not say a word. She did not open it up or say anything, until we were across the world.

After a long 2 days of travel, and we were settled in a hotel for my birthday, my Mother opened the package up, and saw the tiny skirt. My Mother put it on me, and told me who it was from. I didn’t understand the significance of the smuggled skirt, but somehow, that skirt was never thrown away, or given away. As soon as I grew out of it, I put it on my rag doll, the same doll my Mother had carefully made for a Christmas gift, where it has remained ever since, a doll my Mother made for me, and a skirt that my Nanny had made. 2 women from different worlds, who loved me unconditionally.

I attempted to track down my Nanny, but my Mother never actually knew her full name, nor did she ever know what province she was from. Shortly after we left, she was assigned something completely different, so my Father could never track her down. Now when I sit with an older chinese woman who smells of ginger and garlic, I often remember the woman I loved as a child.